This page has been created to help those of you who may have never even heard of Bioremediation until now.  It explains the basic idea behind some of the key points regarding bioremediation: the need, history, application & a brief introduction into how it works.  It is hoped to help you understand the main principles of bioremediation and to give an insight into the course.
Learning Objectives: 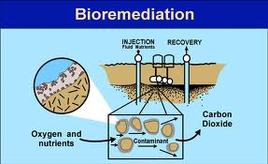 *It is a cost effective and natural process, commonly used to treat organics, fuels or solvents.
Note: "organic" compounds are those containing carbon and hydrogen atoms.

How Does it Work?

How Long Does the Process Take?

The duration of bioremediation is site specific as it depends on multiple factors, e.g.:
• type, concentration, biodegradability & toxicity of contaminants
• size & depth of the polluted area
• soil characteristics
• in situ or ex situ, aerobic or anaerobic and natural or engineered bioremediation process?
It can vary from just a few days to even several  years to have bioremediated enough of the harmful chemicals.

The video below has been provided to graphically explain some common terms referred to through the course, e.g. the water table, aquifer, ground strata, pumping wells and the cone of depression!
Absorption: the uptake of chemicals into plants or microorganisms.
These chemicals may be broken down or remain inside the plant or animal and be released back into the environment when the animal dies/plant decays.

Adsorption: the binding of compounds onto the surface of soil particles.
The amount adsorbed varies with the type of compound, soil, moisture levels, soil pH & soil texture.

Leaching is the movement of contaminants into groundwater from the surrounding medium (e.g. soil/waste).  It occurs downward, upward, or sideways (dependent on the soil, contaminant and GW flow).

Runoff is the movement water over a sloping surface. Contaminants are often mixed in the water & infiltrate the ground.  These compounds may get dissolved into the ground water or become attached to soil particles.

Volatilisation is the process of solids or liquids converting into a gas. 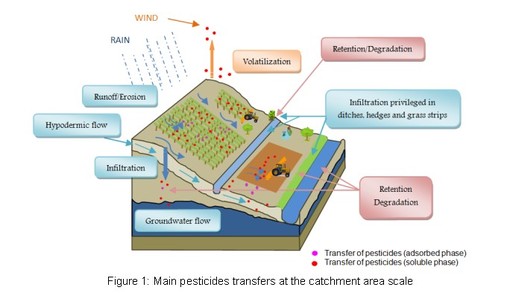 Agricultural pesticides can be transferred through the air (by wind), in ground and surface waters (runoff & infiltration) and through soil/in the ground.